Causal fallacies claim that one thing causes another thing. Establishing these kinds of causal chains is difficult and typically involves assumptions.

Causal Arguments are easy to spot with these phrases/keywords.
(C) = cause and (E) = effect

“After This, Therefore, Because of This”

This is a causal fallacy in which something is associated with something else because of a mere proximity of time. One often encounters people assuming that because one thing happened after another, the former must have caused the latter, as with:

The last thing I remember was a bus coming at me full speed. I am now in a hospital in a full body cast. The bus must have caused my injuries.

This error is very common on the GRE and it usually accompanies any chronological question (over years, days, etc).

Ten minutes after walking into the auditorium, I began to feel sick to my stomach. There must have been something in the air in that building that caused my nausea.

How could you strengthen or weaken this argument?

Strengthen: You could strengthen the second argument above by saying: the auditorium was later closed because of a gas leak, which supports the assumption that something was in the air.

Weaken: You could weaken the argument by targeting the assumption: Before going to the auditorium, he ate lunch at a restaurant that just reported a high level of food poisoning.

Over the past three years, the crime rate in the city has steadily declined. Four years ago, a new mayor took office on a third party ticket whose platform included a tougher stance on crime and improved funding for after-school and other youth programs. Without this mayor’s leadership, it is certain that this positive change in the crime rate would never have occurred.

Which of the following statements, if true, would most weaken the argument above?

This question asks you to weaken the argument. The author writes that without the new mayor’s leadership, the recent decline in the crime rate would not have occurred. However, the only evidence we’re given is that the mayor’s platform included anti-crime programs that preceded the drop in crime. There are dozens of possible reasons for a decline in crime, therefore this argument isn’t very persuasive. To weaken the argument, find a statement that shows that the decline in the crime rate may have been caused by something other than the mayor’s taking office.

Choice (C) suggests that it could have been caused at least in part by the new chief of police, whose increase in officers patrolling by foot could very well have made a positive impact on the crime rate. Choice (A) is irrelevant; we’re only concerned with the past three years. Choice (B) fails to weaken the conclusion because it’s possible that while the youth programs were never implemented, other anti-crime programs were. Choice (D) is irrelevant. Choice (E) strengthens the argument. Choice (C) weakens the argument and is the best answer.

In many pre-schools, children commonly tend to get colds before their resistance develops, and the colds become much less frequent. It is clear that a child requires several colds before white blood cell concentrations rise high enough to effectively deal with colds.

Which of the following, if true, most seriously weakens this theory?

The question is stating that the body’s immune system requires numerous infections to be properly stimulated. It is a causal argument that tries to explain an observation.

Premise #1: Children tend to get fewer colds as they progress through pre-school.
Premise #2: (unstated assumption)
Conclusion: It takes several colds to activate a child’s immune system.
Analysis: This is After This, Therefore, Because of This fallacy. It observes that as children go through pre-school the number of colds goes downs. From this, the creative author develops the theory that a child’s immune system requires them to get several colds before it is fully activated.

The best way to weaken a causal argument is to suggest an alternative causal factor.

(A) Not relevant.
(B) Not relevant.
(C) This choice presents another possible reason to undermine the argument, but the medicine deals with symptoms, not the cold per se. So it is not reducing an instance of a cold but simply decreasing its symptoms (no more runny noses!).
(D) This choice suggests an alternative explanation for the apparent improvement in a child’s ability to fight colds: the child simply becomes immune to individual viruses. So, the theory that a child’s immune system needs high white blood cell concentrations isn’t the case; it is an issue of exposure to certain strains. By suggesting a different causal process to explain the reduction in colds, it weakens the argument.
(E) This choice strengthens the argument, but the question asks for what weakens it.

Trick opposites are sometimes used as junk answer choices on Strengthen/Weaken questions. If the stem asks for what weakens the passage, you’ll find a perfect answer choice for what strengthens it, and vice versa. Choice (E) in the above question about colds is an example of a trick opposite. 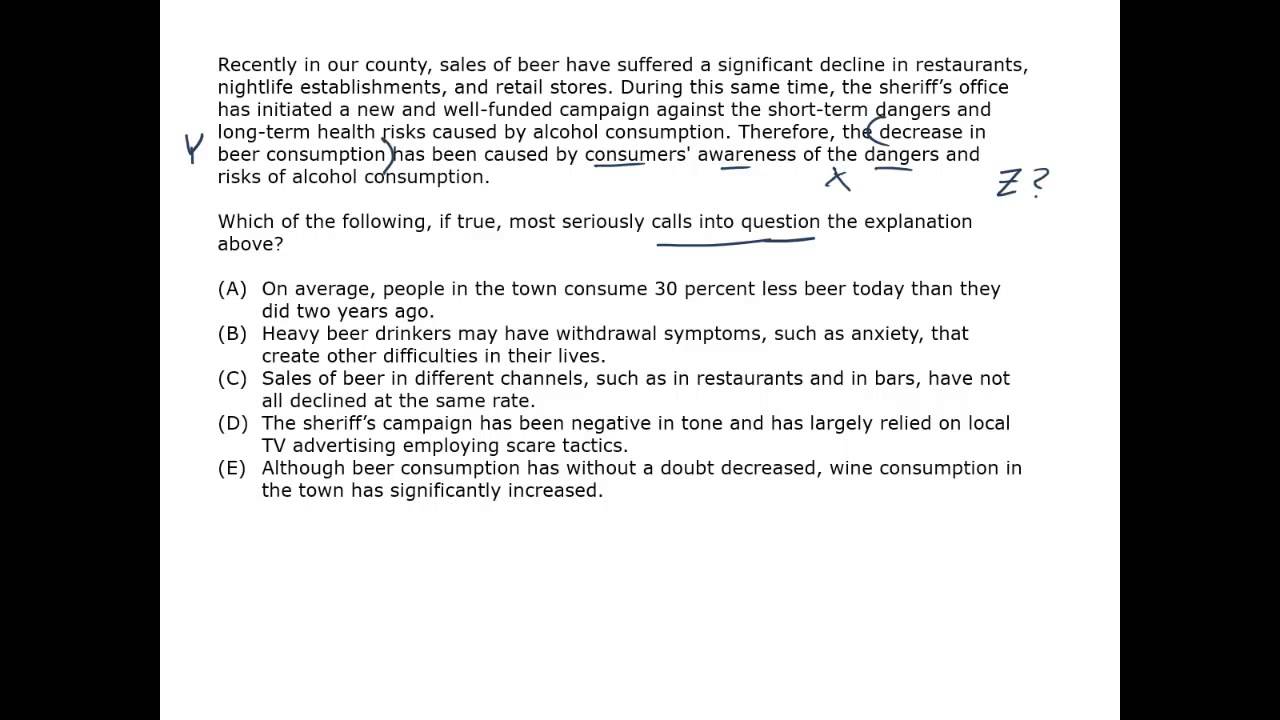