In the last few chapters you’ve played an observational role notating the structure of arguments, flaws in arguments, and finding similar flaws. In this chapter we’re doing a more complex task: we’re fixing broken arguments (or weakening them). This is the final and hardest chapter in the Critical Reasoning course. The questions in this chapter will typically be in the second half of the sections, where the more challenging questions typically dwell.

Here are some examples of Weaken Argument question stems:

The reason? Extreme answers will have a more powerful weakening/strengthening effect on assumptions

In many pre-schools, children commonly tend to get colds before their resistance develops, and the colds become much less frequent. It is clear that a child requires several colds before white blood cell concentrations rise high enough to effectively deal with colds.

Which of the following, if true, most seriously weakens this theory?

The question is stating that the body’s immune system requires numerous infections to be properly stimulated. It is a causal argument that tries to explain an observation.

Premise #1: Children tend to get fewer colds as they progress through pre-school.
Premise #2: (unstated assumption)
Conclusion: It takes several colds to activate a child’s immune system.
Analysis: This is After This, Therefore, Because of This fallacy. It observes that as children go through pre-school the number of colds goes downs. From this, the creative author develops the theory that a child’s immune system requires them to get several colds before it is fully activated.

The best way to weaken a causal argument is to suggest an alternative causal factor.

(A) Not relevant.
(B) Not relevant.
(C) This choice presents another possible reason to undermine the argument, but the medicine deals with symptoms, not the cold per se. So it is not reducing an instance of a cold but simply decreasing its symptoms (no more runny noses!).
(D) This choice suggests an alternative explanation for the apparent improvement in a child’s ability to fight colds: the child simply becomes immune to individual viruses. So, the theory that a child’s immune system needs high white blood cell concentrations isn’t the case; it is an issue of exposure to certain strains. By suggesting a different causal process to explain the reduction in colds, it weakens the argument.
(E) This choice strengthens the argument, but the question asks for what weakens it.

Trick opposites are sometimes used as junk answer choices on Strengthen/Weaken questions. If the stem asks for what weakens the passage, you’ll find a perfect answer choice for what strengthens it, and vice versa. Choice (E) in the above question about colds is an example of a trick opposite. 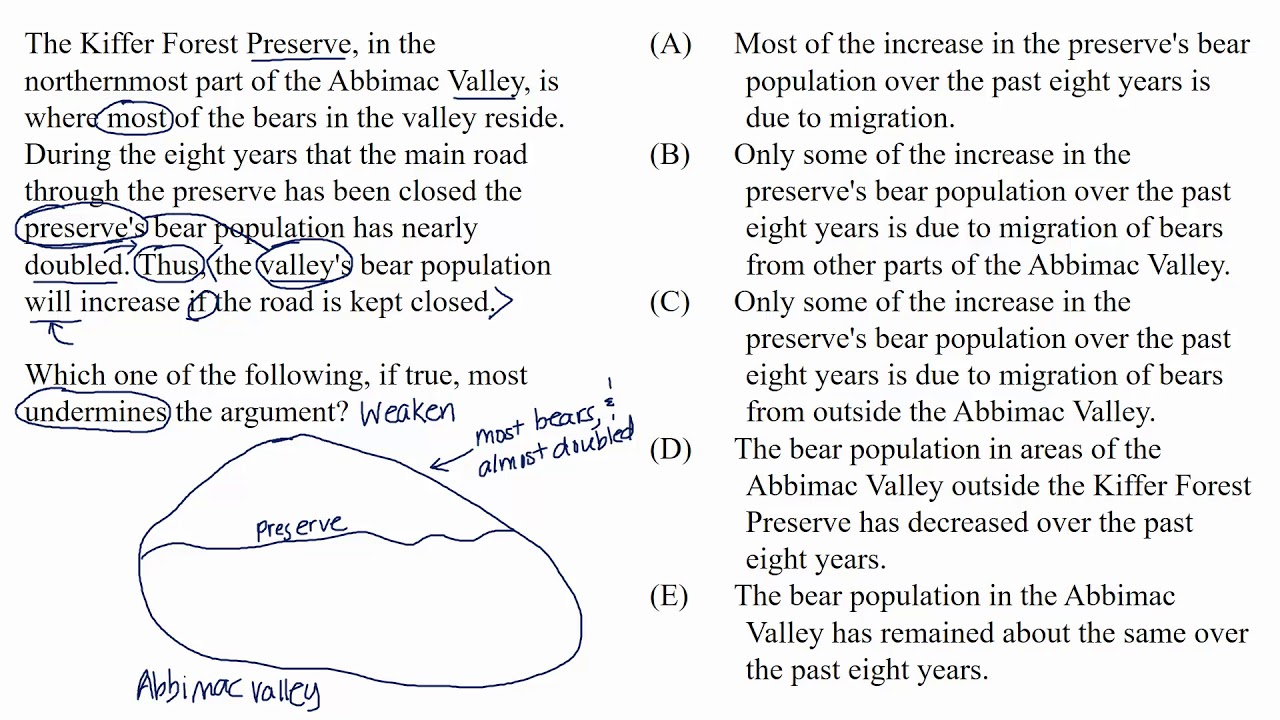