The prior category of flaws dealt with personal insults irrelevant to the argument. Here we describe flaws in argumentation techniques.

1. The Fallacy of Faulty Analogy

Reasoning by analogy functions by comparing two similar things. Faulty Analogy arguments draw similarities between the things that are not relevant to the characteristic in the conclusion.

Premise 1: A and B share properties X and Y
Premise 2: A also has property Z
Conclusion: Therefore, B probably also has Z

Now, let’s look at an example question that revolves around this fallacy.

Mayor of town T decided to lower sales tax in order to boost sales volume. He believes that lowering the tax will increase the sales tax generated since there will be much more total sales volume. The mayor wants to follow the example of town J, where such an experiment helped increase the budget twice in a three-year term.

Which of the following statements is the best proof the opponents of the mayor’s proposal can use in order to persuade the population of town T not to support this decision?

This is a faulty comparison question where two towns are compared.

Which of the following, if true, most weakens the conclusion drawn above?

The passage tells us two facts, one about long-distance runners (they sometimes get shin splints from overtraining) and one about freestyle skiers (they also get shin splints). The conclusion, that freestyle skiers must also overtrain, depends on the faulty assumption that because runners’ shin splints are caused by overtraining, skiers’ must be as well. Choice A is irrelevant. Choice B strengthens the conclusion. Choice C is irrelevant.

In a straw man argument, the speaker gives the impression that he or she is refuting an argument made by an opponent. However, the argument being refuted does not represent the opponent’s true position. The arguer is “attacking a straw man”. For instance, a political candidate might argue against “letting all prisoners go free”, attributing that position to his or her opponent, when in fact the opponent simply favors a highly limited furlough system.

The below video captures the essence of the Straw Man fallacy.

The Congressman wants to cut funding for the attack submarine program. I disagree entirely. I do not understand how he can be so irresponsible and leave us defenseless like that.

You can strengthen a Straw Man argument by showing that the understood argument is not an exaggerated version of the original argument.

The submarine program forms the foundation of our country’s defense system.

You can weaken a Straw Man argument by showing that the understood argument is really an exaggerated version of the original argument.

The assault on the Congressman’s character is far off base. The Congressman knows that the defense budget is finite and prefers spending scarce dollars on more effective defense systems that are unlike the already obsolete attack submarines.

This argument assumes that if one bad thing happens, then another much worse thing will necessarily happen.

The anti-terrorist laws that monitor international currency transfers, phone calls, and emails are the first step to turning our fragile democracy into a new Nazi regime.

Identify the flaws in reasoning.

John: We should oppose any attempt to register firearms. Such regulation is the first step to confiscation of all weapons and the elimination of our constitutional right to bear arms.

Ted: This is preposterous. Many things in society are registered, such as cars, babies, boats, and lanes, yet these items have never been confiscated.

Analysis: Ted is making a faulty analogy between registration of guns and registration of cars and babies. But guns are frequently used as instruments of intentional violence and therefore may be more likely targets for confiscation.

John is making a slippery slope argument that registration of firearms must invariably lead to the elimination of a constitutional right.

Slippery Slope: will a cable company’s poor customer service result you in being left in a ditch?

Also known as circular reasoning, this is presenting a circular argument in which the conclusion is a premise.

5. The Fallacy of Equivocation

The Fallacy of Equivocation occurs when a word or phrase that has more than one meaning is employed with different meanings throughout the argument.

“Every society is, of course, repressive to some extent – as Sigmund Freud pointed out, repression is the price we pay for civilization.”
-John P. Roche, political columnist

This is the so-called “black or white” fallacy. Essentially, it says, “Either you believe what I’m saying, or you must believe exactly the opposite.” Here is an example of the black or white fallacy:

Either you are with me or you are against me.

The argument above assumes that there are only two possible alternatives open to us. There is no room for a middle ground.

You can strengthen these arguments by showing that there, generally, is no middle ground. The problem is that most arguments do have a middle ground, meaning that this argument doesn’t work and is very often a fallacy.

Who could disagree with the bipartisan plan to raise spending far over tax revenues?

Either/Or Fallacy: obviously there are other options than opposing this proposition without being demonized (Ad Hominem and Straw Man).

7. The “All Things are Equal” Fallacy

Plus ça change, plus c’est la même chose (The more things change, the more they remain the same.)

These questions can be easily spotted because they talk about “last year”, or some past time, and try to create an analogy to predict future events. Over time, however, all sorts of dynamic factors change, so it is difficult to draw direct inferences from past events.

Ten years ago I got a 780 on the GMAT, so I expect to get the same score again.

The assumption operative in this argument is that nothing has changed since the last primary. No evidence or justification is offered for this assumption.


This is moving the goalposts or making up an exception when a claim is shown to be false. This is similar to shifting the burden of proof.

Everyone should be patient and wait for his or her turn in line. However, I need to go to the front because I am late for an appointment.

This is assuming that one part of something has to be applied to all, or other, parts of it.

Duke University has the best basketball player in the NCAA, therefore they will win the tournament this year.

Just because there is a fallacy doesn’t mean it is wrong.

A valid argument can still have a fallacy. If it is valid then it will be considered as true for that particular stimulus/question on the GMAT. 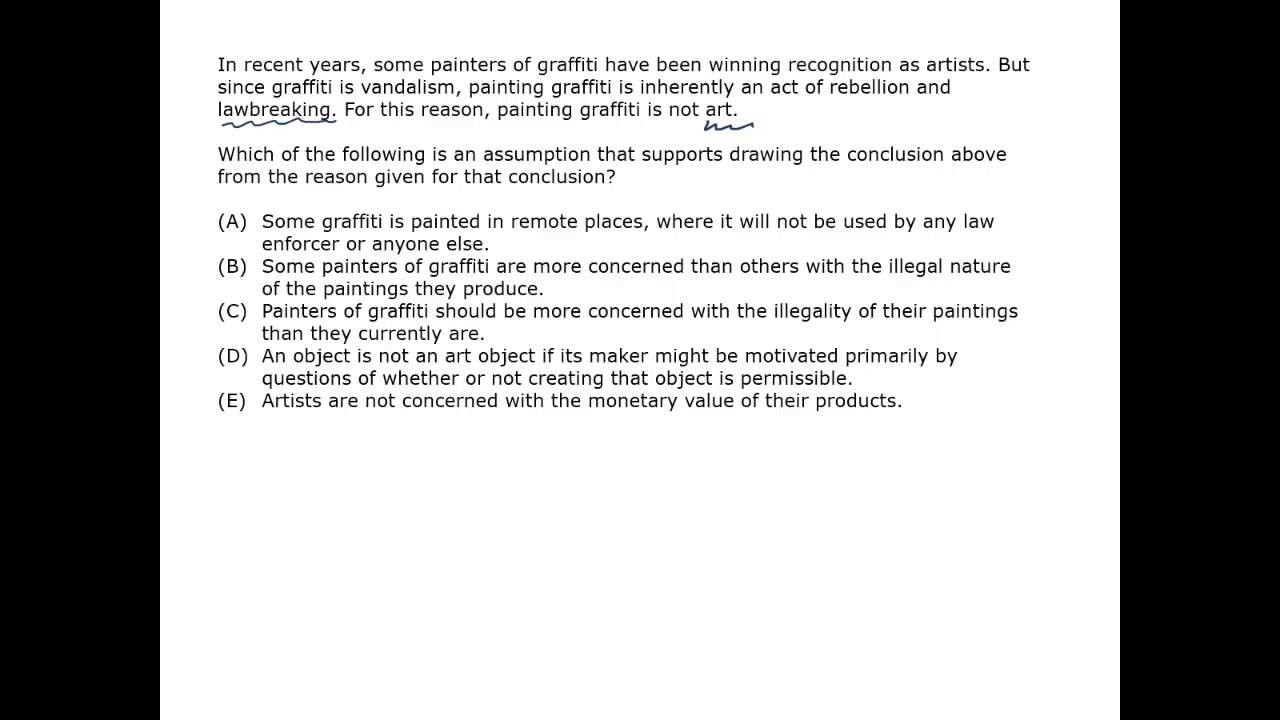 What GMAT score would you get? Take a free diagnostic GMAT with videos and tutor support.
Take a Free GMAT
ASSUMPTION QUESTIONS →