Geometry questions on the GMAT are a logical puzzle. You will be given some information about a figure, and must deduce some piece of missing information. These questions test a set of general rules and formulae that must be memorized.

Through any two points, there is exactly one line, extending infinitely in both directions. A section of a line is called a line segment or a ray.

When two rays originate from the same point, they form an angle, which is represented by the symbol ∠. The point of intersection is the vertex and the two rays form the sides of the angle. Angles that have the same measure are congruent.

Angles can be categorized by their angle measure: acute, right, obtuse, straight.

The midpoint is the center point of any line segment. Bisect means “to cut in half.” A bisector is a line that divides a line segment or an angle into two equal pieces.

When two lines intersect, they create four angles. The angles opposite one another are called vertical angles.  Vertical angles are equal to each other. Also, note that any pair of adjacent angles will always equal 180°

Two lines that never get closer to or farther away from each other and therefore never intersect are called parallel lines.  The symbol for parallel lines is ||.  When two parallel lines are cut by a third line, called a transversal, the three lines form a system of congruent angles.

Be careful not to assume that lines are parallel or perpendicular if it’s not stated explicitly. Don’t be fooled by appearance; you cannot assume that figures are drawn to scale.

There are some rules that are true for all the different kinds of triangles. Be sure to familiarize yourself with these rules.

The area of any figure is the amount of surface that is covered by the figure.

There are three important types of triangle:

Special Right Triangles Based on Side Lengths

There are several special right triangles where the lengths of their sides form ratios of whole numbers. These triangles appear commonly on the GMAT, so being able to quickly recognize them will help you solve problems more quickly and accurately.

Special Right Triangles Based on Angles

There are two special “angle-based” right triangles on the GMAT:

Triangles that have the same shape are called similar triangles.

There are two ways to know that two triangles are similar:

Familiarize yourself with the formulas for finding area and perimeter of the different types of polygons.

The sum of the exterior angles of all polygons is 360°. You can think of this as going all the way around the polygon, making a complete circle.

A figure has line symmetry if the figure can evenly “fold” onto itself.  A figure can have more than one line of symmetry.

A figure has rotational symmetry if the figure can be rotated less than 180° and lines up on the original figure. The point used for the rotation is the center of symmetry.

A diagonal of a polygon is a segment that connects two non-adjacent vertices of the polygon.

Diagonals of a polygon form triangles inside the polygon. The GMAT often uses the triangles formed inside quadrilaterals by the diagonals.

The GMAT often asks for the maximum or minimum perimeter or area. Maximum area is when a triangle or quadrilateral has perpendicular sides and right angles. Squares and 45° : 45° : 90° triangles have the maximum area for the smallest perimeter.

A circle is the set of all points in a plane that are the same distance from the center. A circle has 360°.

A segment from the center of the circle to the circle is called the radius r.

A segment that goes across a circle through the center is called the diameter d. A diameter of a circle is twice the radius.

A central angle has its vertex at the center of a circle, so it is formed by two radii.

A sector is a “piece of a pie” created by a central angle and its arc.  A sector has perimeter and area.

A tangent to a circle is a line that touches the circle in just one point. A tangent is perpendicular to a diameter.

Angles formed by a chord and a tangent are half​ the measure of the arc.

Tangents from a common exterior point are congruent. The measure of the angle formed by the tangents is half the difference between the measures of the two arcs.

The surface area, SA, is the sum of the areas of each pair of congruent sides.

A cylinder is like a can.  It has circles as the top and base, and straight sides.

A sphere is like a ball.  The formulas for circumference, surface and volume all use the radius.

Slope of a Line

The slope of a line, m, is its slant.  The slope can be used to give the rate of change.

There are two ways to graph a line:

Writing the Equation of a Line

An equation of a line can be found from two points, or from one point and the slope.

Then substitute the slope m and one of the points into the point-slope formula.

The Distance Between Two Points

The distance between two points can be found using the Pythagorean theorem.

There are 3 common transformations that move or change a figure on the coordinate plane: 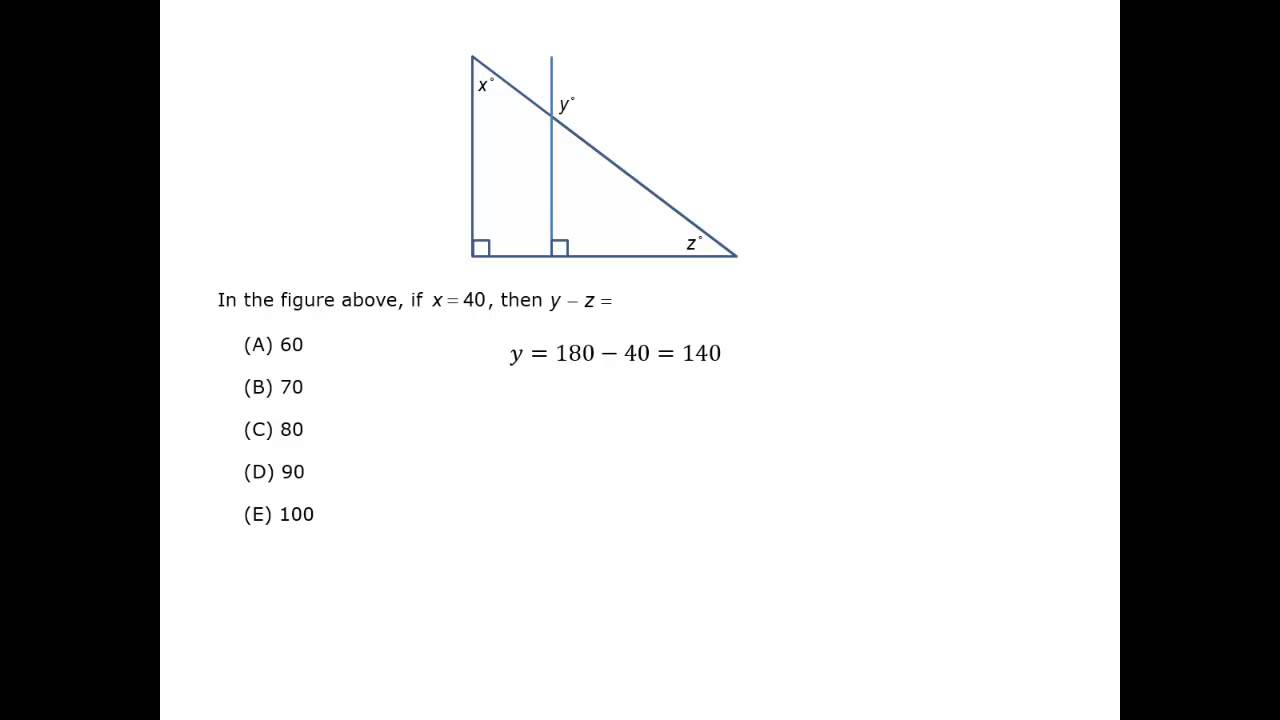