Parallel questions involve finding the answer choice that mostly resembles the idea or principle behind the question. You can spot parallel questions by looking at language cues that tell you to compare reasoning structures such as:

Parallel flaw questions are similar to principle questions but instead of identifying similar principles, you will identify similar flaws between the question and one of the answer choices. This type of question is easier to spot because it will explicitly ask you to identify which of the choices most closely resembles the flawed pattern of reasoning in the question.

The correct answers to most GMAT questions will have a middle focus. Don’t choose overly broad answers that the passage can’t support, and don’t choose overly narrow choices because passages usually aren’t that focused. Take a look at this example.

The author is primarily concerned with:

B is likely to be correct as it is closest to the middle scope. It deals with an animal and its habitat but is not too narrow and also not too broad. It fits nicely in between:

Watch out for words like all, never, always, and only. These qualifiers are strong and are usually outside a passage’s scope. Just think how hard it would be to write a short passage that argued:

Look for answers that use some, most, or many. These qualifiers indicate a limited scope. 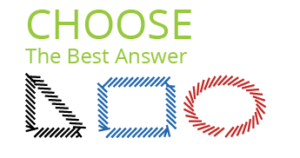 Yes, you say? Well . . . not exactly. Rather, there is one best answer and four not-so-good answers. For example, main idea questions generally have one or two answers that are partly correct but flawed in some way. A wrong answer to the question “What is the main idea?” might summarize the main idea of only part of the passage.

Your goal is to pick the best answer to the question, not hunt for the One True Answer.

Unless you are highly pressed for time, always read all answer choices before making a decision. An answer that seems basically right could be rendered incomplete by a better choice. Do not ask yourself if an answer is correct. Ask yourself if it is better than the other choices.

Which of the following assertions in the passage is supported by an example?

Now, turn it on its head:

Which of the following assertions in the passage is NOT supported by an example?

What can you do? Practice! You have to learn to reverse your thinking. Practice assists in acquiring that skill. One pitfall is to overlook the critical reversal word and then wonder why all the choices seem correct. NOT, LEAST, and EXCEPT will be used in caps to indicate you’re looking for the reverse answer. Rephrasing the question before you answer it is helpful.